"We know how digital transformation should work" 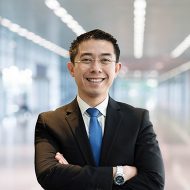 Mr. Hoang Viet Anh is known as an innovative leader who has successfully bring FPT Software “go global”. He has pioneered to bring FPT to the world from APAC, Japan to the US. Thereby, promoted the Vietnam ICT industry to the world.

By a fearless spirit and seamless strategy, Mr. Hoang Viet Anh has left his fingerprint on a wide range of million-dollar-project varied from oil and gas, telecommunication, finance and banking to aviation, logistics, government, defense.

Under his leadership, FPT Software has become Top 1 Vietnamese ICT and honored on The Global Outsourcing 100 by the International Professional Outsourcing Association (IAOP). FPT representative is in the Leader group with most of the IT giants of India.

In Asia, FPT Software is one of nine companies which is qualified to provide Application Development and Migration Service for Singapore government. In Japan, FPT Japan has become the largest Vietnamese ICT company and made its way to the Top 50 ICT company in Japan including FujiSoft, DTS, Systena Corporation, and so on.

Moreover, FPT America is a partner of the world’s largest satellite TV service company or a leading aircraft manufacturer. At the same time, the company is also a regional partner of GE Digital and Predix Global Partner of GE.

FPT has established 38 offices and R&D center worldwide, served hundreds of customers from 45 nations. Moreover, FPT Software has been the first ICT company in Vietnam successfully M&A the RWE IT Slovakia, a member of RWE Group, leading European enterprise in infrastructure. RWE IT Slovakia then was renamed FPT Slovakia setting a milestone on the globalizing journey of FPT.

Sharing his vision on Digital Transformation, Mr. Hoang Viet Anh told Forbes Vietnam in an interview: “FPT has been involved in digital transformation since 2015, but only partially, not a big picture. However, four years of working with large corporations around the world and participating in project parts also helped us to imagine what the digital transformation story would be.”