"It's no longer the big fish who eats the small fish. Any fish can take over the pond, as long as it can creatively take advantage of technology" 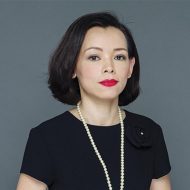 Ms. Nguyen Bach Diep is currently the Chairman of the Board of Directors and Chief of Executive of FPT Digital Retail Joint Stock Company. She is also the legal representative of Long Chau FPT Pharmaceutical Joint Stock Company (FPT Pharma), a subsidiary of FPT Retail.

In 2019, Ms. Nguyen Bach Diep has been honored Top 50 Vietnamese Women of the Year 2019, announced by Forbes. She is also honored as one of the 20 most powerful women in the business sector in 2019.

Dubbed the “steel woman,” for six years, Mrs. Diep and her team of 5,000 employees brought FRT from the original 17 stores to nearly 470 stores that achieved an after-tax profit of nearly 290 billion VND, surpassing senior names in the industry such as Viettel, Vien Thong A and Tran Anh.

After the first two years of “lower losses than planned,” the third year FPT Retail earned a profit of over VND 40 billion. Three successful reasons, according to Ms. Diep, are “careful, detailed,” “open new stores quickly” and “learn from the leader, reduce risks.”

Not only follow the leader of the market, FPT Retail also tries to make a difference. They opened F-Studio to distribute Apple products after a long period of actively approaching and negotiating. By the end of 2017, the number of F-Studio stores reached 10 stores. “They are very careful in selecting locations,” Mrs. Diep explained about the new open speed of F-Studio. FRT also seeks business solutions to create added value for customers, while helping them increase sales.

The company of more than 5,000 employees aims to achieve sales of approximately one billion US dollars by 2020. To turn the goal into reality, the company offers three main directions of development. First, relying on Apple’s retail store chain, with a new opening rate of about 100 stores in the next three years. Secondly, the program “use then pay” aimed at a set of close customers in the past.

Finally, expanding new industries, as the mobile and telecommunication market is in the mature stage, there’s not much room left to grow. FPT Retail “took a baby step in the pharmaceutical market,” when Mrs. Diep announced to invest in Long Chau drugstore chain, to research and understand the market.

Although the goal of opening the chain has been unchanged since the first day of establishment, but the FRT has made adjustments to match each stage of development. A few months after deploying the chain of stores, Ms. Diep and her colleagues decided to set up an IT department, develop their software, after using the software available from the innermost businesses. “To go quickly, we have to deploy many branches at the same time, only the information technology department in-house can meet the schedule, ensure the flexibility,” she said.

She also paid attention to the ongoing 4.0 industrial revolution. She said that 4.0 is important at this time, if the business is not prepared and cannot keep up, it will be eliminated immediately.

For years, FPT Retail has applied a wide range of technology in order to enhance its capacity. Currently, FRT call centers use the chatbox to answer, the online sales site has up to 70% of customers’ questions asking about products and promotions that were answered by the machine, so FPT Retail operates more effectively, saving resources and costs.

After 6 years of establishment, FPT Retail has about 11 million customers previously identified scattered and untapped. Now the company has completed a big data and exploited this data to analyze customer groups serving individual customers’ needs, analyzing what they like, buying what … and other key insights to be researched.